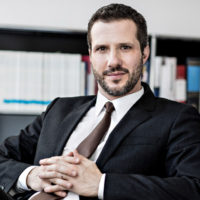 Simon, thank you for joining us today. Let’s get right to it: Which digital technology tools do you use during hearings and how have they improved your work?

I have good news for arbitration lawyers, Svenja: Hearings, as they are usually conducted in arbitration proceedings, will withstand further digitalization over the coming years. Currently, the focus is on verbal descriptions of human behavior. We usually explain to others what people did in the past and why. These explanations are recorded on a  verbatim transcript which then serves as basis for an, again, manually written decision. There is not a lot of digitalization in this process and it is no surprise that digital aids have
not fundamentally changed the way hearings are held nowadays. Nevertheless, there are some tools from the “digital toy-box” which I regularly see, and use, in hearings, and which can be helpful in certain cases.

Could you give us an overview of your digital toybox?

Of course! I feel that the major tools in recent years have been:
Tablets: They have already to an extent, and certainly will at some point widely, replace the A5-booklets which were ubiquitous even a decade ago. Tablets are easy to handle on small desks and evidence is quickly available. However, I doubt whether paper will ever become truly redundant; direct comparisons of multiple documents can be burdensome on just one tablet.
Cloud systems: Practitioners who work in law firms that use cloud solutions for their databases have full access to all materials during the hearing.
Video-conferences: Individual witnesses can be examined through video-conference and need not be in the room if unable to travel.
Multimedia: I’m seeing more videos in hearings than 10 years ago. Small devices can record and play videos, which can have a powerful impact in a hearing– but not always in favor of the party showing a video.
Exhibit management-software: Reasonably sophisticated software can help preparing e-briefs, timelines or chronological bundles. These can also be helpful in hearings for finding relevant evidence quickly.

There has been a definite shift in visual presentation styles: 10 years ago flip chart sketches and simple Powerpoint presentations were the principal methods for presenting an argument, real multimedia spectacles are sometimes seen today. While this can be very entertaining, it is my personal experience that a convincing advocate and a flip chart can be just as persuasive as most multimedia presentations.

Digital aids in the preparation of hearings also shift priorities personnel-wise: a decade ago, an army of assistants had to prepare and carry the hard-copy files for the hearing. I remember from my time at CMS that sometimes three to five assistants worked for several days to produce the A-5 hearing booklets. Today, this type of preparation is long gone. In technically sophisticated law firms the lawyers directly work with the original file on their database which is then accessible in the hearing room via the cloud as well.

In your opinion, are there any dangers or disadvantages to the increased use of digital technologies during hearings?

Absolutely. If the WiFi does not work, the use of all cloud-based systems is immediately precluded. If a coffee is spilled over a tablet, evidence becomes inaccessible. If chargers are forgotten, the hearing ends after day one. In my view, it is crucial to have a “plan B” for these instances, for example if you cannot log into the WiFi.

The latter applies in my view: without digital aids, it would not have been possible for me to open a law firm and do arbitration counsel work opposite big Swiss and international law firms from day one. With exhibit management software, tablets, online databases, etc. I could prepare legal briefs and hearing presentations without the resource of a large team. So when it comes to the basics, at least, I believe that digital aids ensure better equality of arms between David and Goliath.

From another point of view, can digital technology help to save costs? For example, can witnesses from distant locations just be interviewed via videoconferencing? Or would the human component inherent in such hearings be lost?

It is certainly possible and in some instances, I have seen it work well. At the same time, I have also seen instances where the video-conference for witness examination led to problems – for example bad connection, hidden people in the room giving the witness undue instructions, or connection problems every time a difficult question is asked. In my view, it can be helpful, if, for example, in a small case where only one witness needs to be conferenced in and heard on limited issues. There, reasonable costs can be saved. In bigger cases, where a physical hearing is guaranteed regardless, the travel costs of witnesses hardly makes a difference to the total costs.

Looking at the impact digital technology will have: Do you believe that the entire conduct of hearings, e.g. the preparation, presentation and transcription of legal evidence and arguments will undergo a transformation or are you of the opinion that there are some elements that will not be affected?

For me, the key question is: who is the decision maker? As long as these are people (and not algorithms!), I only see digital aids working to assist proceedings to the extent that the work products of these aids can be grasped by human brains. However, the situation will drastically change if and when decision making becomes automated. In such a future scenario, the transformation of human-made and analog arguments into digital form will revolutionize the legal profession.

The possibilities of virtual reality are increasing rapidly. In what context do you think its use can be beneficial for conducting a hearing? Will technology only be beneficial with regard to certain process types, for example construction processes?

Indeed, a site inspection by use of 3D virtual realityglasses while comfortably sitting in a hearing room is a tempting idea, however I must admit that I have not yet experienced it in practice. I wonder whether it would be cost-efficient, though: I imagine that legal counsel of both sides (maybe even with experts) and a technical team with a 3D-camera would need to travel to the site in any event to prepare the virtual environment in a balanced and mutually acceptable way.

And even then, there would be a risk that a detail could be insufficiciently documented and later becomes important during the hearing, meaning a physical inspection is needed anyway. Therefore, I would probably be reluctant to agree to such a procedure unless there are compelling reasons, like for example safety concerns on a certain site. In such a case, it can be a good idea to send in a drone or robot with a camera instead of the Arbitral Tribunal – particularly so, if you or I should happen to be one of the arbitrators…

Finally, if we look ten years ahead, do you think that analogue hearings (with judges) will still be relevant, or will digital intelligence outsmart us completely?

In my opinion, certain legal disputes will become automated by so-called “robot judges”, especially in small value claims where the procedural costs are currently close to prohibitive. For example, if your case is worth USD 50,000 and you have the choice between an automated resolution costing USD 1,000, or human lawyers and judges resolving the dispute for aggregate costs totaling close to (or even in ex ess of) the matter value, the decision will not always be to use the traditional process. Maybe, as a first step, the “digital judge” would be offered with a traditional appeal process in order to avoid  completely arbitrary results. However, costs of the appeal would probably have to be  advanced by the appellant. If there are no appeals, or appealed decisions are consistently upheld, we will know that we have entered a new era of dispute resolution.

However, I think that we won’t see these types of developments for another ten years or more. At least, it looks unlikely based on the progress made in the last decade; arbitration hearings in 2030 will not be wildly different from those in 2010 or 2020.